Property supply at the lowest for over 10 years 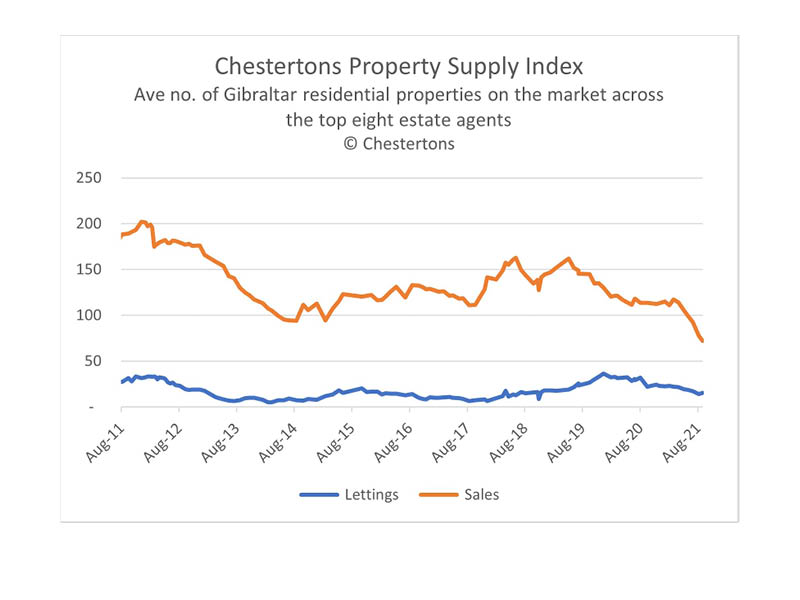 Since 2010, Chestertons has recorded the number of Gibraltar residential properties available for sale and to rent across the top eight estate agents on a monthly basis.

Properties may be multi-listed, sole agency, open market, local market or off-plan. Hence it’s not so much the absolute number that matters but the trend.

Conslusions:
• The average number of properties for sale via local estate agents is at its lowest since Chestertons began recording data in 2010
• On 31st August, the average number of properties avalable for sale at each of the top eight estate agents was 72, twelve months ago this was 114 and twenty-four months ago this was 145
• The only other time when the average number was below 100 was a 5 month period during 2014 / 15 autumn / winter albeit the lowest then was 94
• The number of properties for rental via local estate agents is at its lowest since August 2018 with just 16 properties available on average at each of the main local estate agents
• In the last 5 years, the following developments have been completed: Imperial Ocean Plaza, Ocean Spa Plaza, Midtown, Clemence Suites, Quay 29, Quay 31, The Hub, as well as some local three year residency stock, hence all of these properties (>1,000 units) have been absorbed into the market (owner occupied or let). Furthermore, virtually all properties currently under construction and made available by the developer, Eurocity, E1, Arengos, Sylvian Suites and Forbes, have also sold ahead of completion
• Prices are rising because supply is not keeping up with demand
• Valuers are also finding it difficult to value with disparties up to 20% between different valuers on the same property in some respects. This has an impact on the amount a purchaser can borrow against the price they need to pay to buy a property

“We think property prices have increased close to 10% in this calendar year alone. Rental prices follow this albeit perhaps rents are up 5% - 6% as investors accept slightly lower yields.”

“With inflation increasing in major economies across the world, including Gibraltar at 2.4% (up from 1.4% in April and 1% in January), property is proving to be a solid store of value. Gibraltar property remains good value for those seeking to relocate from central London and other major cities.”

“The construction industry provides the Gibraltar economy with most likely the best positive ripple effect from a monetary perspective than any other local industry. Import duty on materials and stamp duty on purchases swell government coffers, architects, surveyors, engineers, accountants, bankers, lawyers, home furnishing retailers and tradespeople all benefit economically from property construction. Building our way out of this current deficit is quite possible with demand levels as they are now.”

“The challenge is to maintain an infrastructure that can cope with the ever increasing number of properties and people (schools, hospital, sewage, roads, amenities etc) as well as finding a way for new construction sites not only not to spoil the aesthetics or lifetsyle we enjoy in Gibraltar, but to enhance them. Encouraging more modern construction methods (eg off-site), more carbon neutral materials (less pollution), more empathetic design standards (not just dull blocks) and more focus on green landscaping (eg more trees) will go some way to achieve this.”